If you've been following our blog, then you know that we only spotlight the top quality tool brands in the metal roofing industry, so it is only right that IRWIN TOOLS have their time to shine.

Keep reading to learn about the IRWIN TOOLS' brand history, their best metal roofing products, and why professional roofers across the globe trust IRWIN TOOLS to get the job done.

IRWIN TOOLS was founded in 1885 when the first IRWIN Auger Bit hit the market, but the brand story begins before that in 1884 with Charles Irwin working at a pharmacy he owned in Martinsville, Ohio. One day, a customer came in with an idea. This customer was a blacksmith and he wanted to create a solid center auger bit. Irwin was impressed with the idea and quickly bought the rights to the invention. After patenting the invention, Charles Irwin joined forces with four business partners and IRWIN Auger Bit Co. was formed.

Four years later, in the small town of DeWitt, Nebraska, a Danish immigrant named William Petersen used his blacksmith skills to invent the very first pair of locking pliers. Petersen patented his new invention as the "Vise-Grip" and began to sell the tool out of his trunk. Petersen Manufacturing later changed its name to American Tool Companies in 1985 and by 1993 the company acquired IRWIN Tool Company.

Aviation snips, also known as metal snips, are a must-have tool for professional metal roofers. A good pair of craftsman aviation snips must have a sharp edge that is tough enough to slice through the metal sheets that will be used for your roof panels.

IRWIN TOOLS also makes a pair of Multi-Purpose Utility Snips with blue handles and yellow accents. These utility snips are perfect for cutting sheet metal, rubber, vinyl, plastic, and more. These multi-purpose snips deliver compound cutting leverage with Pro-Touch™ Grips to provide a comfortable grip and they resist twisting while you work.

IRWIN Tinner Snips are similar to aviation snips, but there are better suited for cutting thinner sheets of metal. IRWIN Tinner Snips can easily cut through metal or solid steel as easily as scissor blades through paper and they are best for cutting gutter hangers or long, straight lines.

Tinner snips can cut in every direction, though they can sometimes be difficult to maneuver. IRWIN snips, however, have precision-ground edges on the blades to ensure a tight grip for superior cutting quality, and the handles are encased in Plastisol with Pro-Touch™ Grips that resist twisting for more comfortable use. Unlike with other brands of inner snips, your hands won't get tired of using IRWIN Tinner Snips with a comfortable grip and the hot drop-forged steel blades offer maximum strength for long life. 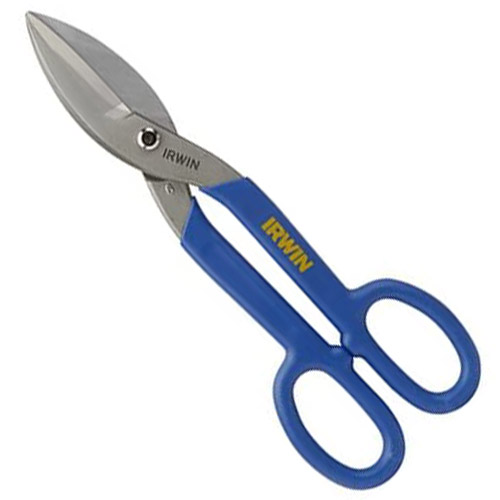 As we mentioned above, William Peterson invented patented the Vise-Grip technology in the late 1800s and late his company later merged with IRWIN TOOLS. IRWIN Vise-Grips are known for their unparalleled ability to grip metal or steel and lock it into place so you can easily hold a steel pipe or piece of sheet metal steady while you cut.

IRWIN TOOLS makes a wide variety of Vise-Grip tools for your every need:

Now that you're all caught up on the IRWIN TOOLS brand, you know who to turn to for your next metal roofing project.